You are using an out of date browser. It may not display this or other websites correctly.
You should upgrade or use an alternative browser.
EVENT: Friday Fight Night: Search & Destroy
DATE: Friday 20th August
TIME: 17:30 AWST 19:00 AEST 21:00 NZST
MODS: N/A
HOST: BigD Gaming (Customer Server)
MAP: Anvil AAS V1
BRIEF:
The Russians have attempted to hide two stashes of weapons and white sniffing powder….it is up to the British to find them!

British intelligence has located 4 possible stash drop zones in the northwest corners of the Lashkar Valley. Your job as the British army is to find which of the four locations has the stashes, the Russians however must defend their goods at all costs!


GAMEPLAY & GENERAL RULES/RESTRICTIONS:
1) Locate and destroy the two Russian Stashes (Radios)
2) Both Russian and British HABS/Radios may be engaged
3) The radios/stashes for the Russians will be randomly selected by the admins on the night
4) No Artillery strikes
5) No Mortars

British Specific Rules:
1) 2x A10 Strikes allowed
2) No restrictions on how many habs you can use
3) Rallies allowed


Russian Specific Rules:
1) 2x SU-25 Strikes allowed
2) Only one layer deep of sandbags and one layer of razor wire allowed to defend the radio
(Sandbags may be stacked as high as you like, this is to reduce super fobbing)
3) Russians will only be able to have two habs, these habs will be built off the two radios/stashes
4) The radio can be saved if it doesn’t bleed out and if habs go down you can replace them
4) Rallies allowed
5) No attempting to block off radios with objects that cannot be destroyed or by exploitation

RSVP:
To reserve you spot, head over to the BigD Discord and sign up in the "BigD Events" by reacting accordingly. 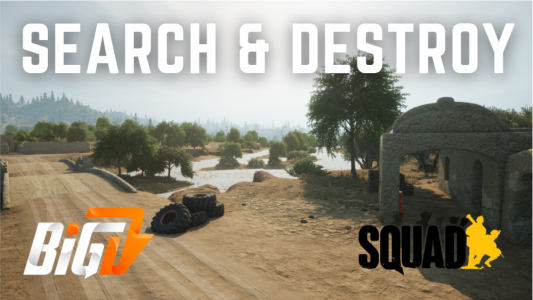 Past dates ​
Upcoming dates
All times have been adjusted for the timezone: Australia/Sydney